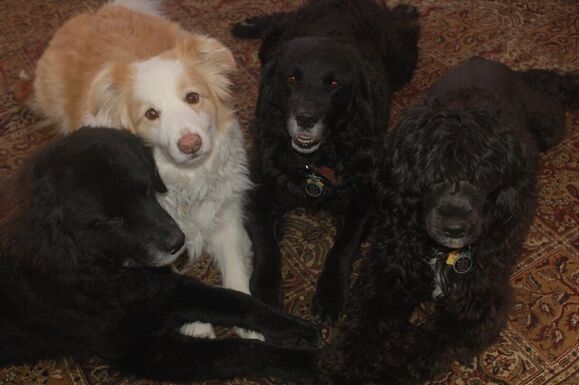 Our Portuguese Water dogs come from the Sakonnet PWDs kennel of Mimi & John Karlsson in Hope Valley, Rhode Island.  We have had three Sakonnet dogs, two of whom form the basis of our small kennel (Asta and Beleza).  Our dogs compete in a variety of performance sports including Obedience (AKC and CDSP), Rally, Agility (AKC and NADAC), Barn Hunt, Canine Nosework (AKC and NACSW), Water, and Tracking.  All of our older dogs have earned their Canine Good Citizen certificates and all have earned several levels of tricks titles.  We also have one AbFab Border Collie who, in addition to the above sports, is learning Herding.   In 2018-2019, Kari earned 4th place in the PWDCA Owner Handler program for Performance Venues and 9th place in All Venues Combined, a testament to her working with all of her Portuguese Water Dogs.

We tend to start retiring our dogs around age 10 to ensure that they do not incur muscle injuries from strenous activities like agility.  Nevertheless, they still compete and/or train in other fun, but less hard-on-the-body activities for as long as possible.  Within the last year, Darwin earned four scentwork titles and his tracking dog title as well as two NADAC agility titles, and thus earned a MAC-4 and MAC-5 (Multiple Achievement Award from the PWDCA), a Gold Register of Merit (from the PWDCA), and a VCD1 and VCD2 from the AKC; Bell earned her Rally Intermediate, Advanced, and Excellent titles, her Beginner Novice Obedience title, her Tricks Advanced title, her Novice Agility, Novice Fast Agility, and Novice Jumpers Agility titles and her NADAC Novice Tunnelers and Jumpers titles; she earned a MAC-2 from the PWDCA.  Uta earned her Novice Obedience (CD) title, as well as her Rally Excellent title, and qualified for the AKC Rally Nationals in Advanced Rally -- this was her second time qualifying for AKC Rally Nationals.

Our youngest, Red Scully, earned her Novice Tricks title at the end of August 2018 (4 mos old) and her Intermediate Tricks title at just a year of age, and her Advanced Tricks title just before turning  two years of age.  She earned a Junior Water Dog certificate in summer 2019 and followed that up  by earning her first qualifying run in ACT agility in the fall and her second qualifying run in the early summer.  She shows great promise for training in agility and water, and has started training for competition obedience, and nosework.

​To learn more about each dog, click on that dog's collage. 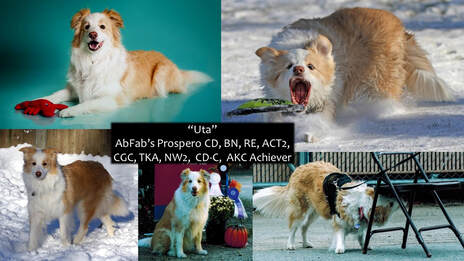